Posted on January 29, 2013 by Pixelles Montreal

Lynn Hughes is one of the co-founders of the TAG lab, and she studies contemporary game culture. Coming from a background of artistic practice and the history and philosophy of science, Lynn sees game culture as a range of contexts for design, spanning from large commercial game production to single-author art games. One of the key characteristics of this culture is that it is post-cinematic: the computer has replaced the camera as the technology of production. While, over time, this has spurred on an increasing systematization of production, it has also meant increased interactivity, and in recent years, increased democratization of the means of production as well as distribution.

Lynn’s particular interest is in games that do not necessarily centre on a screen. Games that destabilize the centrality of vision and use other kinesthetic senses tend to be more interpersonal, creating spaces for play with other bodies. These spaces still follow the basic form of a game, that is, a designed space that leaves room for player improvisation, but they challenge some prevailing stereotypes about game culture and the status of games as “art”. 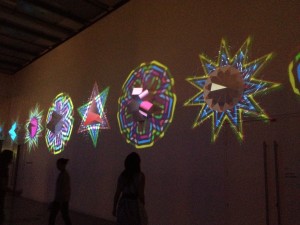 Some examples of these types of games can be found in the exhibit Joue le jeu, held last summer at La Gaïté Lyrique in Paris. Lynn was one of the curators of the show, and explained how certain pieces were commissioned for the space, as well as how they worked in the exhibit. Other examples that Lynn shared were the games by Johann Sebastian Joust, the TAG game Propinquity, and the game culture created by Babycastles.

Prototyping means putting together a working version of the essential elements of your game in order to convey an instant of fun. Based on your game concept document, the key elements included in the prototype should be the essential actions and mechanics of play. The prototype will allow you to test out the game play and communicate to a player what is fun about your game. 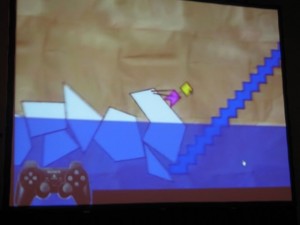 Some examples of prototypes for well-known games:

Your prototype will be simpler than these, but the basic idea is the same: to capture the fun of your game. It doesn’t need to be pretty, although sometimes it helps to have a “juicy” element to draw people in. The main idea is to allow you to try out the game mechanics – which also means that you should keep an open mind at the prototype stage. Don’t be afraid to change things up if your prototype results in unanticipated consequences. Also don’t be afraid to start again from scratch after you’ve made a prototype – often you will learn a lot from prototyping so that the next time around, making your game will go much more smoothly.

Make a working prototype of your game: it should include the essential characters, items and controls, and some elements of the environment. The main objective is to be able to try out the gameplay.

The specifics for this week’s homework were determined individually and varied by participant, but the basic elements tended to look something like:

The homework assignment thus depends heavily on the game type. For a game primarily about challenge and skill, the level design is more important, for example. The goal at the end is to have a very short/small play area that suggests the core gameplay. If you are a Follow-Along participant and you’d like to get an individualized homework assignment, just send your concept document and whatever you have so far on your game to info@pixelles.ca.

Next Week: Art and sound….

Posted in Follow Along, Pixelles Game Incubator 1
About Pixelles
Pixelles is a non-profit initiative committed to helping more women make and change games. We're based in Montreal, and have already succeeded in building a supportive community of game creators, both hobbyist and professional.