The Future of Romance in Games

Posted on November 16, 2013 by Pixelles Montreal

Despite being a long time gamer, I am still very new and fresh to the actual gaming industry itself and all its inner workings. So, I was incredibly excited when I was asked if I wanted to attend MIGS 2013. With a bit of scrambling and schedule shifting, I found myself attending the second and final day of the summit.

It’s no secret to Pixelles that I have a very soft spot for romance games and dating sims. Whether it’s saving the galaxy and falling in love, or choosing the perfect combination of clothes to woo the popular high school boy, I find myself drawn to the sub-genre for better or for worse. So of course, as soon as I saw in the itinerary that there was going to be a panel on romance games, I knew I had to attend.

Romance Games: Unpopular Genre or Untapped Market? was presented by writer and narrative designer, Heidi McDonald. McDonald works for Schell Games LLC, a company that mainly develops educational games. Previously, she had worked in radio, communications, as a freelance writer, and a stay at home mom. In talking with McDonald, she suggested that her interest in romance games was almost entirely by accident, but with two partial sources:

She wanted to change that.

“It comes from an intellectual curiosity of mine, independent of what I do every day,” she began her. Already, I was feeling excited. Five minutes into the panel, and she already had me softly chuckling to myself with her comments and anecdotes about the various games. I knew that not only was this going to be enjoyable as a fan, but also informative as a potential game designer. I usually play romance games without a second thought, so having to actually look at them critically was a much-needed change for me.

So what does it mean for a game to be a ‘romance game’? According to McDonald, she states that there are 3 aspects that one should consider to see whether or not a game constitutes as a romance game.
“[…]They must include relationships; sexual or emotional, it’s pursuit or conquest either by the player or by the NPC, in most cases, and some sort of consequence to gameplay in varying degrees of importance and using different mechanics.”

As I listened to her list these traits, I thought about the games that I considered being part of the romance genre. Games like Persona, Mass Effect, Harvest Moon, and Hakouki all included relationships in which you must attempt to woo one of the NPCs, whether it was through dialogue trees, giving gifts, or taking them out on ‘dates’. While they may not be explicitly considered romance games, they certainly had all the makings. 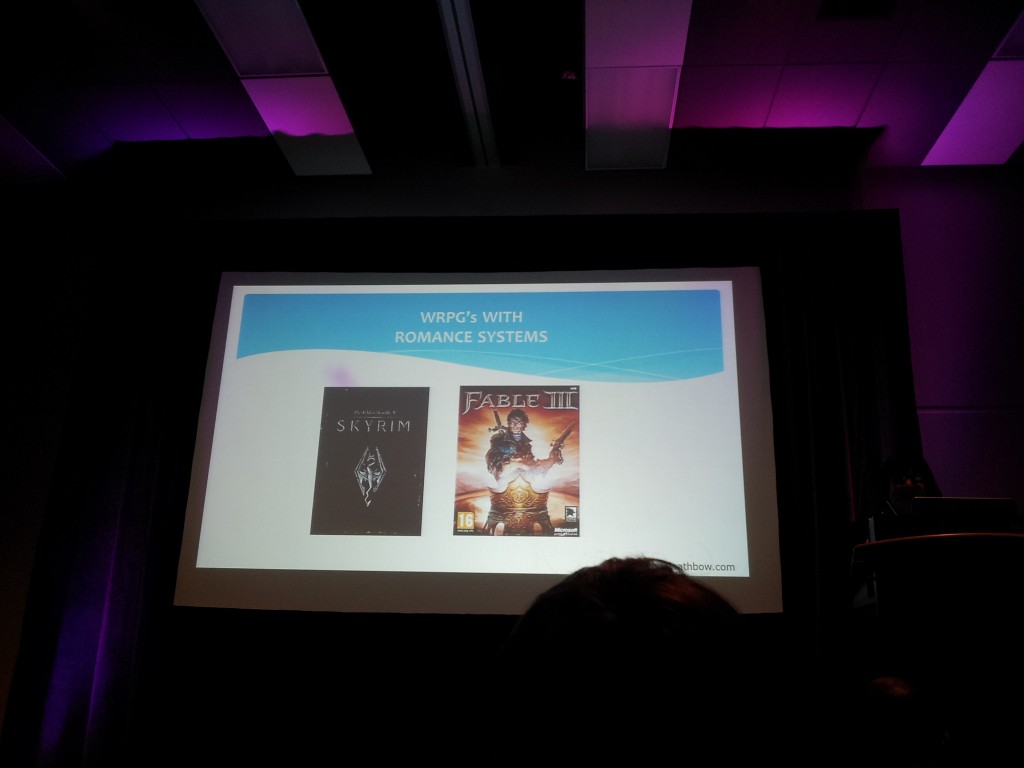 McDonald also compared the differences in the popularity of romance games between Japan and the West. In Japan, otome games (literally translated as ‘maiden games’) have certainly found their place in the game market and sell extremely well. She gives a variety of reasons as to why they are much more popular in Japan than they are in the West. They are a more favourable version to real life dating in terms of cost, looks, and personality. In this regard, I would have to disagree with her as I would say that it’s actually overcomplicating things more than what it really is. I don’t think that is the main reason that these sell so well. Otome game developers already had a model to work off of when marketing these games to women; shojo and josei manga. These are comics that are focused more on romance, friendships, and emotional struggles that often have female leads and are more often written by women. These stories are just as popular as their more action packed counterparts and sell just as well.

In the North American comic industry, not only is there a struggle to find comics and graphics novels targeted towards women, but it’s also a struggle for women to break into the comic book industry. Like McDonald, I am not a statistician, but there does seem to be an interesting link here. It just seems to echo the same issues that the video game industry faces rather closely. There seems to be this odd apprehension of breaking out and adding (not replacing) more variety to their audience in fear of failing, despite large indicators of it not being the case if done properly.

Of course, when it came to actually making these types of games popular in the West, McDonald does essentially recommend the model that I felt Japan followed, but with books. When she interviewed Jennifer Hepler, she said that the breakout game could be a romance game set to a strong sci-fi or fantasy background that are typically found in teen and young adult fictional books and films. And how would you make this game believable and engaging?

“The key to creating empathic games, and ultimately to making romance games work is focusing on the characters […] it means that emotional fulfillment is your core design basis.”

Overall, it was a very enjoyable panel and honestly and I could probably listen to Heidi McDonald talk about romance games all day. I was very appreciative for her to give me a few minutes of her time after the panel to ask her a few questions, which she so politely responded to. Hopefully with more of her talks and her research, romance and empathic games may just finally find their place in the western gaming world.

Heidi McDonald is also conducting a survey on romance in games. If you are interested in participating in her survey, please visit her website.