Posted on November 12, 2013 by Pixelles Montreal

Around 6:00 pm, after the last talk I attended stopped a bit short, I sat down with a friend and a new acquaintance and chatted, keeping my eye out for custodial staff. I had heard the word “product” a lot that first day of the 2013 Montreal International Game’s Summit, on the fifth floor of the Palais de Congres. I had heard a lot about monetization and distribution models and what publishers really want and so on. I wanted to ask a custodian what it was like to work during conventions like this one.

Suddenly, a hunkering, elderly man in an ill-fitting black suit and bowtie was rolling two wide craft tables covered with pastries and coffee dispensers down the hall. He was glowering and sighed audibly in the purest expression of simmering exhaustion. No custodians in sight. Oh, well. We all needed to be someplace.

When I arrived at the venue, I wasted some time before the first talk with a coffee and a book in a downstairs convenience store. On a rack of of cheap toys and baubles across from my plastic chair hung a bank playset in clear plastic packaging. It was part of a line called “Play2Learn” and comprised a Monopoly-style plastic register, some plastic coins and fake bills of every denomination. Learn how to money by way of game. 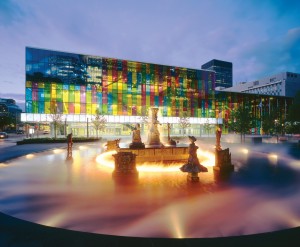 I saw three business talks today given by successful white businessmen. Each one had insight about market research on player retention, or how to adjust your submission to really impress a publisher, or how Amotz Zahavi’s “handicap principle” has a lot to do with revenue streams from F2P microtransactions. Each one recognized the move away from AAA as a brand and toward “indie,” the move toward free apps, the disintegration of the traditional money-making structure, and how to adjust. How to succeed and weather the change.

The first, Nicholas Lovell, founder of blog Gamesbrief, author of several books on self-publishing in the digital age including How To Publish A Game, and business consultant to a variety of publishing and development companies, sang the virtues of the microtransaction during his talk, “Why Does Free Work?” Gleeful and passionate, he assured his audience that free apps with scaled in-app purchases unlocks the potential of The Curve, conveniently his theory and the title of his latest book.

This is where the handicap principle comes into play: on the curve is the vast majority of people, at the bottom, who will not buy your game for any amount of money. Then there are the people who will pay increasingly more until at the zenith you have “superfans” who identify so strongly with the “product” that owning it isn’t a matter of content and money is no object. They have an excess of love for the product and wish to conspicuously consume it, and it is those folks whose consumerist manifestation of so-called “handicap principle” theories are best harnessed and who yield the most profit with the highest retention rate. He demonstrated the value of appealing to brand identification and suggestive, but not coercive payment models using the examples of Tim Schafer’s successful Kickstarter and Trent Reznor’s clever pay-what-you-want album release with tiered rewards for payment thresholds. Lovell was a hell of a businessman. Superfans, retention, brand identification, emotional engagement, conspicuous consumption. Things to feed on in an age when content itself is being utterly devalued. Things to hope for. A self-help book just waiting to be bought.

Execution Labs co-founder and former OpenFeint vice president of monetization, Keith Katz, took us through the expensive trial and error of designing successful Facebook ads, the data mined on which levels in their individual games engendered the lowest customer retention, and why. He was less about preaching the big picture, and more about fine-tuning the details. Maybe the players are having trouble in one area and giving up. The graph shows less players in level 5 than in level 4. There are a lot of graphs.

Arduous are these tests and surveys, though valuable ways of measuring player satisfaction, Katz demonstrated throughout “Marketing and Monetization for Mobile Indies: Lessons from the Trenches.” The best way, it turned out, to correct the player dropoff issue was through compromise: make the preceding level not just a little easier, but basically fail-proof, and that solves your problem. And the best way, also, to figure out which ad aesthetics are the most alluring involved investment of $150 or so into Facebook ads services. Worth it, he says, even if you’re working on “a shoestring budget.” Again, the word “product” keeps coming up. Product and customer. Product and customer. Revenue and retention. Graphs and surveys.

Sherpa Games President and CEO Warren Currell gave that last, truncated talk. In this one, entitled, “What Publishers Want – an in-Depth Examination of the Game Connection Publisher Survey,” Currell intimated to the small, end-of-day crowd in a tired and languid monotone and a slideshow full of graphs and tables the kinds of pitches publishers expect (absolutely perfect ones) and the kinds of genres publishers are looking for (action is in, but racing is out, or something). Adjust your product to appeal to your buyers.

Tired, anxious and hungry like everyone else seemed to be, I was quite glad to get to my feet 15 minutes early. I’m glad I didn’t miss the old man sigh after all that.

Though, I don’t think any of these men have bad intentions–Lovell explicitly admonished ethical implementation of monetization strategies. I think their hearts are even in the right place. This is an unstable industry and the old model is disintegrating. Most of us are indies, or what might better be described as freelancers, looking for markets, looking for audiences, looking for livelihood. These men have business experience; these men maybe have some solutions.

But these men also have capital. Their businesses have capital and the companies they consult often come with significant capital. Tim Schafer has capital, so does Trent Reznor. And not just of the financial variety. What do you do if you can’t bankroll your pre-existing wealth or fame into momentum in this new age? How much do you court the people with money? How much do you compromise? And what if the stars just never align?

This new age, a plastic playset slowly teaching us how to play with the money. It’s an unfair, unbalanced, kind of hostile playset. It’s harder for some to catch on than others, those of us who got here too late, or were born into the wrong body, place or time.

Who gets to harness the power of the curve? Who gets to dictate, then, how and what others can create, and what they’re capable of achieving with it. The system isn’t just fickle and random like the mythical chaos of the internet audience; it’s slanted and organized. The disintegrating megacorporations of games might just reconstitute themselves with the right guidance from people like these men. Or, new brands are simply created to fill a power vacuum, terms like “indie” are marketing strategies. Some of us hold the money. Some of us put on a suit that doesn’t fit right, and we sigh.