Posted on October 16, 2021 by Pixelles Coordinator 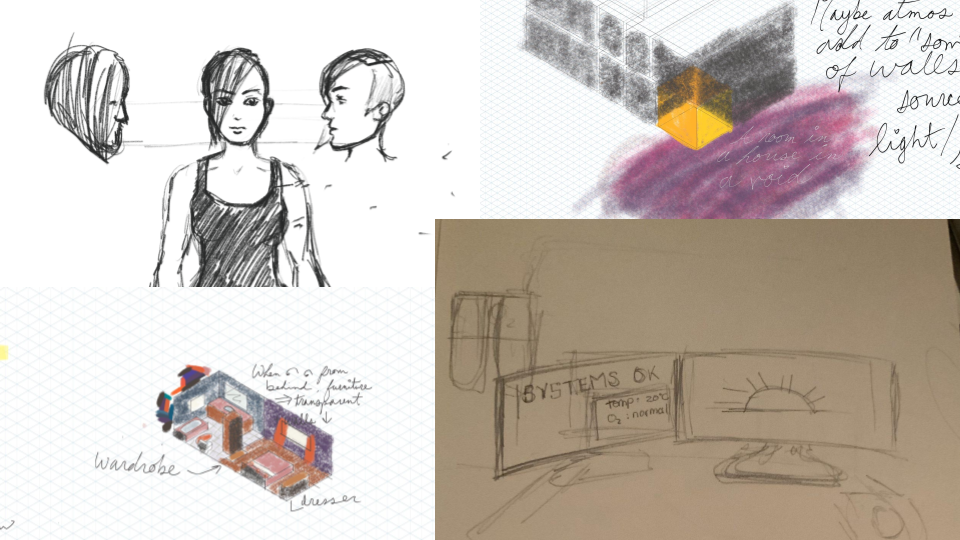 And that’s a wrap for week 2 and game ideas are already getting more precise!

This week was all about the basics of Game Design. Our incubees were asked to deconstruct their game idea and choose the engine that was right for them. From detailed diagrams to scenarios and concept art, we’re excited to see everyone’s ideas slowly take shape!

If you’re having a hard time defining the core concept of your game, try this template:

I want to make a [GENRE] game about [THEME] where the main mechanic is [VERB] in [GAME ENGINE].

For example, “I want to make a rail shooter game about archerfish where the main mechanic is shooting water in Construct”. Having a focus helps you make decisions and sets your main goal for your game!

Don’t worry if your idea isn’t 100% clear right now. As we continue through our program, you might discover new paths and opportunities that weren’t there before! In fact, it’s expected that the game you make won’t be exactly what you initially thought – embrace it!

The basics of game design

This week, we met Sofi Lamont-Cardinal, lead game designer at Behaviour Interactive. Sofi talked to us about the role of a game designer and showed us the steps to start designing a game.

Start by identifying what we will do in the game from the biggest to the smallest element:

Sofi left us with some great advice to take advantage of the program:

We started the Design session by presenting the concept of MDA: Mechanics, Dynamics, and Æsthetics. It’s one of the many frameworks we can use to analyze games. It helps give us a common language to talk about our games and other games.

While designers create the game with mechanics as their base material, players experience the game’s æsthetics first.

There are many types of æsthetics – often called types of fun – to describe the emotional response players have when playing a game, including the following 8 types defined by Robin Hunicke, Marc Leblanc and Robert Zubek in the MDA Framework.

When designing a video game, one of the very steps is to identify your target player. Understanding who will play your game will help you make the best choices to create an engaging, stimulating and fun experience. Know what motivates your player to play and what they are seeking in your game that makes it fun for them.

Quantic Foundry developed a Gamer Motivation Model based on data collected from a large sample of players from around the world. They came up with 12 major motivations for players that are grouped into 6 categories. Use this model to inform ytour design decisions in ordre to fulfill – and surpass – your target player’s expectations of you game.

How to get started

Start by designing the 2 or 3 main mechanics that you’ve selected. They should be the most important actions the player will take in your game.

If one of them doesn’t work, replace it by the next one until you have narrowed them down to the best mechanics for your intended experience.

If you get something that feels good, add the next mechanic to see if it makes things better.

In most studios, the game will first exist as a design document. This can start as a pitch document – a general idea presenting the game and often supported by illustrations or diagrams. The next step is a fully fleshed-out concept document in which designers define the game’s core mechanics, systems, gameplay and controls, characters, environments and objects, target audience, and any other important game element.

This week, participants started making their own documentation and paper prototyping. This form of prototyping refers to sketching out your game on paper first, using props (like playing cards, figurines or coins) and diagrams (flowcharts, storyboarding, etc.) to try re-creating your game concept. Instead of spending hours tackling unknown tasks at the computer, use your paper prototype to make your goals clear, and to take inventory of what exactly it is that you even need to code and make art and sound for.

This is particularly helpful if you want a branching narrative: drawing a diagram by hand can help you figure out holes and missing branches very quickly.

Now that you know the motivations of your player and that you have established your design blocks, that is to say your game mechanics, your role, as designer, is to define the gameplay and engagement loop of your game. What will be the main stages that will allow your players to progress in your game? Don’t forget that there are loops at all levels of your game: from micro-loops at the action level, to medium loops on the systems level and a macro loop that encompasses the entire game.

Keep in mind that loops can be embedded one in the other.

This week, we also talked about Level Design. Jeanne Painchaud from PaperCult Games gave us an excellent level design workshop you can follow on video or read through the Slides (in French only).

What is Level Design?

If you prefer reading, you can look at the slides from last year’s presentation and the following summary.

Many things can help us create levels that will be more interesting or fun for the players. Those aren’t rules per se, and some things could be a bit different depending on what type of game you want to make, but it should give you a good idea of what level design is and how it can help you make the game you have in mind.

During the presentation, we look at the 6 pillars of Level Design.

There are many ways we can vary the rhythm in a game. For example, if we’re trying to make a platformer, it wouldn’t be very interesting to have platforms that are all at the same height, and at the same distance. To vary the rhythm, we could:

The introduction of your game is something important because the players don’t know the rules. Even if your game seems very easy for you, it’s going to be hard for players. You need to make sure that you guide the players, but without holding their hands. They should figure out some things on their own. This could be done, for example, by putting the player in a situation where they must jump to continue the game, instead of simply adding a long wall of text that would explain what to do.

Usually, the introduction should be done in a safe environment, where players can’t die and where they can try stuff without negative repercussions. It’s also a good idea to introduce new things one at a time so that players don’t feel overwhelmed by all the new information.

As a general rule, try to always have a structure that makes sense. Of course, this will depend on the type of game you’re making, and on the structure or the layout of the map. For example, if you’re in a hallway with a bunch of apartments, and each door is only a few inches away from the other, it’s unlikely that a real full-size apartment could be behind that door.

Also, try to avoid backtracking as much as possible. For example, it wouldn’t be very interesting for a player to go from point A to B, and once there be told that they need to fetch an item at point A in order to continue. Unless going back to point A brings something new to the story or the gameplay, this moment of the game wouldn’t be the most interesting thing for the players. It isn’t forbidden to do that if you want, but if backtracking is needed, try to justify it so the players feel like there is a reason why they need to do something again.

Balancing is a hard thing to do, but an important one for sure. It’s hard to do because your game will always be easy for you. Players shouldn’t think that the game is unfair, and that something is impossible to do. Ideally, the difficulty should increase as you get more skilled. It’s also a good idea to introduce something, and to give time to the player to master it before we introduce something else. This is something we could see in most Zelda games where you’ll find a new item in a dungeon, use it, defeat a boss, and then move on to another dungeon where you’ll find another item.

Challenges should also be linked to the rewards you can get. The more difficult challenges should have better rewards than the easiest one. It could be a bit disappointing for the players if they defeated a little slime and got 1000 gold pieces, and only got one wood branch after defeating a big dragon.

If our action has a consequence, we should see it. For example, if we kill an enemy, and hear a door open, but don’t see it and have no hint of where this door might be, it won’t really help the player progress in the level.

Posted in Game Incubator, News, Pixelles Game Incubator 9
About Pixelles
Pixelles is a non-profit initiative committed to helping more people make and change games. We're based in Montreal, and have already succeeded in building a supportive community of game creators, both hobbyist and professional.